Even the longest road starts with one small step.

I fall in love with art and dance at a very early age. It was easy to get started due to my father Bokor János who is a performer and a singer also.

I took up singing in 2004 at National Entertainer Center of Hungarian Musicians and Dancers Trade Union where my teachers were Kovács Orsolya, Esze Jenő, Szatmári Orsi and Lukács Kinga.

I regularly performed in solo on concerts of OSZK In the Stefánia Palace, Fészek Klub, Sport Max Centrum. With bands I sang in like Csaba és a Neobabák, MusicShowCompany, CasinoBlack and SpaceJam Band we played on events with a production of retro and pop-rock styles. I have played several times as a guest artist at concerts of Brian Adams tribute bands. At the moment I perform on a large scale of events: Solo performances, partially playbacked shows and also with bands and with piano.

In 2015 decembre Music Fashion Ltd. published my first album on which the songs were composed in cooperation with Krisztián Burai, Leslie Szabó, Kállay Saunders András. After the release formed the Bokor MaRIAnna Band where among others we play songs from the album. The song Indulhat a show was performed on MTV1, Duna TV and was in the rotation of Juventus Radio in 2014 – 2015.

The album Indulhat a show was published in 2015 decembre by Music Fashion Ltd. 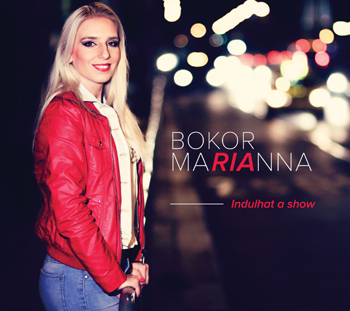